Jay Z - The War on Drugs: From Prohibition to Gold Rush

Posted by A New PATH (Parents for Addiction Treatment and Healing) at 11:49 AM No comments:

Posted by A New PATH (Parents for Addiction Treatment and Healing) at 11:47 AM No comments:

As lead organizer of the grassroots community organization Suncoast Harm Reduction Project, I wish to make the position of the mothers and families in our community known re: HB 477 / SB 150.

We stand in opposition to both these bills unless amended to include judicial discretion.

I lost both my sister and my mother to accidental overdose. I’ve witnessed my son spend 5 days on life support and then get up and use drugs again. I’ve been to court maybe 50 times with family members dealing with drug related “crimes”.   Reading this you may find it counterintuitive that I, our organization, and most of the families we’ve worked with stand against the current Florida legislation promoting tougher sentencing in the face of our opioid overdose crisis.

Our collective up close and personal experiences with the ravages of addictive illness have taught us that more punitive incarceration is not the answer. As more families become affected by opioid use, many parents have educated themselves, concluding that we need to treat this medical disorder as a public health crisis. History shows that supply never drives demand. Assuming the intent of these bills is to combat addictive illness, we view these bills as strictly supply interdiction, and having no effect on the public health crisis. This approach equates to ineffective use of taxpayer dollars.

In 2015, there were 1,488,707 arrests for drug law violations. As a country, we are now dealing with the overincarceration of drug offenders.  Those convicted of drug charges are subject to exclusion from public benefits, housing, college grants, employment and even voting.  Cycling in and out of the criminal justice system and resulting barriers to social services has become the greatest roadblocks to sustained employment and meaningful recovery.

Despite theories that mandatory minimums will target only those selling specific substances, in practice nearly every individual suffering from addictive illness finds it necessary - at some point -  to engage in behavior that is often construed as sales. The resulting mandatory minimum sentences imposed on vulnerable populations in need of health services creates long term familial and community voids – these communities report increased violence, which also puts law enforcement at greater risk of harm.

Increased penalties of the “crack epidemic” taught us that longer, tougher sentences and mandatory minimums did more harm than good. Families of color were disproportionally affected, even though rates of drug use show no racial disparities.   What is their goal in this overcriminalization?  If it is to curb drug use, it has proven to have gotten worse over the past 45 years after 1 trillion+ dollars spent.  Can Florida afford to spend a million dollars locking up one person for life rather than investing in the community with treatment and other life-saving resources?  In Florida prison spending continues to rise, while spending on addiction treatment is gutted.

Posted by A New PATH (Parents for Addiction Treatment and Healing) at 5:03 PM No comments: 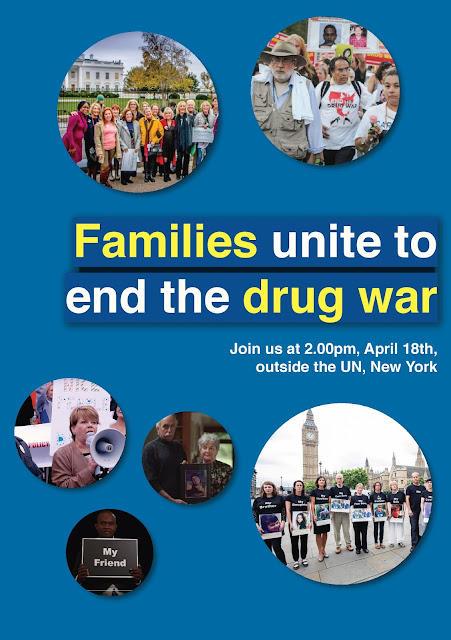 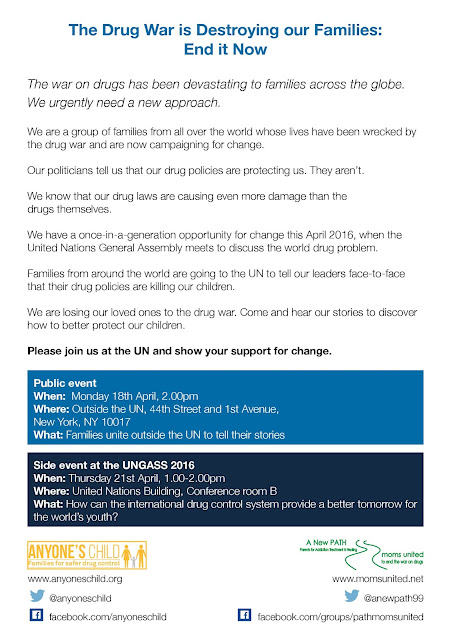 Posted by A New PATH (Parents for Addiction Treatment and Healing) at 2:39 PM No comments:

Moms united to end the war on drugs

Moms united to end the war on drugs Mothers, family members, healthcare professionals and individuals in recovery are joining together to bring focus to our country's failed drug policies and the havoc they have wreaked on our families.


Moms United to End the War on Drugs is a growing movement to stop the violence, mass incarceration and overdose deaths that are the result of current punitive and discriminatory drug policies. We are advocating for therapeutic drug policies that reduce the harms of drugs and current drug laws. The figures are staggering:
Overdose: In the US, men aged 35-54 are more likely to die of a drug overdose than a car accident. In 2006, the latest figures published by the Centers on Disease Control, 26,400 people died of an unintentional drug overdose in the US. And, yet, because of punitive drug laws, people who witness an overdose are often too afraid to call for help.
Arrests: Over 1.8 million people in the US were arrested for a drug offense in 2008, 1.4 million of them for drug possession – not sales or trafficking. A disproportionate number of these arrests are ofpeople of color, particularly young African-American men, even though drug use and sales rates are comparable across racial and ethnic lines.
We encourage you to join Moms United to End the War on Drugs, a campaign of A New PATH (Parents for Addiction Treatment & Healing) in partnership with a growing number of organizations and individuals in a massive collaborative effort to change our current punitive policies of arrest and imprisonment to health-oriented and therapeutic strategies.
Click here to read the full article.
Keep up-to-date with drug policy developments by subscribing to the IDPC Monthly Alert.
Posted by A New PATH (Parents for Addiction Treatment and Healing) at 2:10 PM No comments:

Daniel Raymond is the Policy Director for the Harm Reduction Coalition.

Hitting Bottom on the Politics of Punishment: Needle Exchange and the Costs of Inaction

To Save Lives, Give Drug Users the Overdose Antidote

Photo Credit: Photographee.eu / Shutterstock.com
As drug overdose continues as the leading cause of accidental death in the , everyone who knows someone struggling with addiction has one word on their mind: naloxone. Also known by its brand name, Narcan, naloxone is a medication that can reverse potentially fatal overdoses from opioids like heroin, methadone or prescription pain relievers.

For decades paramedics have administered naloxone to patients experiencing opioid overdose. About 20 years ago overdose prevention advocates realized that naloxone would save more lives if programs could distribute it to active drug users. The Chicago Recovery Alliance is credited with creating the first organized naloxone distribution program in 1996, but a decade before that, a couple of rogue paramedics in had already launched an initiative of their own.

During the 1980s, resident David Sparks became an unwitting participant one of the first experiments in naloxone distribution.  “I used to live next door to an ambulance service,” said . “One day one of the EMTs was bummed out because there was some bad fentanyl [a synthetic opiate] going around and people were dying. The EMTs knew I was using drugs and as we were talking, they offered to give me a few vials of naloxone and show me how to use it on people who overdosed. I wasn’t sure at first because I didn’t even know what naloxone was.”

Opioid overdose stops a person’s breathing, which can result in brain damage or death. Naloxone works by temporarily blocking the effects of opioids, thereby restoring normal breathing. Before receiving naloxone, had used rescue breathing, or mouth-to-mouth resuscitation, to get oxygen to people experiencing an overdose. But naloxone, administered through intramuscular injection or intranasal spray, can restore normal breathing patterns much more quickly and easily.

laughs recalling the first time he used naloxone. “A guy overdosed on heroin in my house just as he was eating a carrot,” he said. “I was grateful not to have to do rescue breathing on him because his mouth was full of chewed food. I injected naloxone into his muscle and it was amazing how fast it worked. By the time I got to my feet, he was up too.”

While people are often hesitant to call the authorities for fear of legal ramifications, the official recommendation is to call 911 to report an overdose even if naloxone is on hand. Because naloxone only temporarily blocks the opioids, the person could overdose again after it wears off and might need followup medical care. Rescue breathing is also recommended until the person can breathe on their own.

After his first naloxone rescue, reversed overdoses in nearly a dozen other people. He also distributed the antidote to some of his peers, who used it to save lives. The paramedics supplied him with naloxone for two years before the private company went out of business.

“After they left, I went back to rescue breathing [when someone overdosed] because I didn’t know where to get naloxone,” said.

It would be almost 15 years before someone else realized what those paramedics knew all along—naloxone is most effective at saving lives when in the hands of active drug users. Today, approximately 250 naloxone distribution sites exist in 28 states. Many have started in just the past four years as communities respond to the burgeoning problem of drug overdose deaths.

“I’m alive today because of naloxone,” said Kinzly, who has overdosed twice. “If we are going to make a difference in preventing overdose deaths, we need to get naloxone to the drug user community.”

This summer will become the newest state to implement a naloxone distribution program. Following the example of 14 other states, Georgians advocated for new legislation to protect medical providers who prescribe naloxone and anyone who administers it to an overdose victim from liability. The law, enacted in April 2014, also protects people who call 911 to report an overdose from arrest for some drug charges, prosecution for underage drinking and parole violations.“We want to make sure naloxone gets into the hands of the very first responder—other drug users,” says Mona Bennett, executive director of the Atlanta Harm Reduction Coalition.

This July, AHRC plans to introduce a naloxone distribution program modeled after a program at North Carolina Harm Reduction Coalition that has reported 80 overdose reversals by laypeople since August 2013 Thirty years after paramedics gave him his first dose of naloxone, David Sparks is now 10 years drug-free. In his free time he volunteers with one of ’s 17 distribution programs to provide education and naloxone to people at risk for drug overdose.

“No one should ever die of an [opioid] overdose,” said . “As long as the antidote exists, there is hope to prevent those deaths. We just need to get naloxone to the right people. I’m glad I was able to help starting doing that.”

To some people, giving active drug users the tool to reverse overdose might be a new or even controversial idea. But as and countless others illustrate, drug users have been coming up with creative, resourceful ways to keep themselves and their friends safe for a long time. Naloxone programs do more than just distribute an antidote. They also prove that active drug users can and do take responsible actions to save lives.
To find the naloxone distribution program near you, visit the program locator. Or learn more about how to start a naloxone program.

Posted by A New PATH (Parents for Addiction Treatment and Healing) at 1:47 PM No comments: